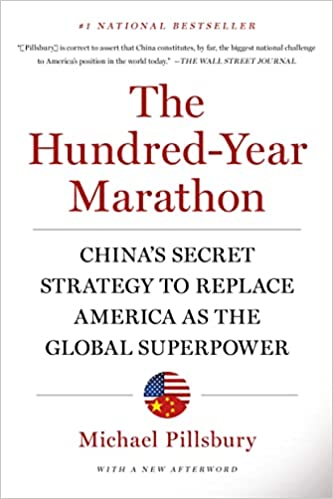 The Hundred-Year Marathon: China's Secret Strategy to Replace America as the Global Superpower is written by Michael Pillsbury.

Amazon describes it as such:

One of the U.S. government's leading China experts reveals the hidden strategy fueling that country's rise – and how Americans have been seduced into helping China overtake us as the world's leading superpower.

For more than forty years, the United States has played an indispensable role helping the Chinese government build a booming economy, develop its scientific and military capabilities, and take its place on the world stage, in the belief that China's rise will bring us cooperation, diplomacy, and free trade. But what if the "China Dream" is to replace us, just as America replaced the British Empire, without firing a shot?

Based on interviews with Chinese defectors and newly declassified, previously undisclosed national security documents, The Hundred-Year Marathon reveals China's secret strategy to supplant the United States as the world's dominant power, and to do so by 2049, the one-hundredth anniversary of the founding of the People's Republic. Michael Pillsbury, a fluent Mandarin speaker who has served in senior national security positions in the U.S. government since the days of Richard Nixon and Henry Kissinger, draws on his decades of contact with the "hawks" in China's military and intelligence agencies and translates their documents, speeches, and books to show how the teachings of traditional Chinese statecraft underpin their actions. He offers an inside look at how the Chinese really view America and its leaders – as barbarians who will be the architects of their own demise.

Pillsbury also explains how the U.S. government has helped – sometimes unwittingly and sometimes deliberately – to make this "China Dream" come true, and he calls for the United States to implement a new, more competitive strategy toward China as it really is, and not as we might wish it to be. The Hundred-Year Marathon is a wake-up call as we face the greatest national security challenge of the twenty-first century. Link to Amazon page.

Why We Picked this Book

David has three overriding reasons behind selecting this book.

The material below is intended to help provide people a richer context around the subject and we will add to this as we move towards the discussion. If anyone has any recommendations to add please let Sam know.

"Michael Paul Pillsbury (born February 8, 1945) is an author, and former public official in the United States. He has been the Director of the Center on Chinese Strategy at the Hudson Institute in Washington, D.C. since 2014. Before coming to Hudson, he held various postings in the U.S. Department of Defense and U.S. Senate throughout his career. He has been called a "China-hawk", and an "architect" of Trump's signature policy on China.

He was described by President Trump as the leading authority on China in 2018. Pillsbury is the author of three books on Chinese foreign policy strategy and Sino-American relations. His most recent book, The Hundred-Year Marathon, appeared as a selection of the 2017 U.S. Special Operations Command, Commanders Reading List, as well as number one on the Washington Post bestsellers list. According to The New York Times, Pillsbury's book "has become a lodestar for those in the West Wing pushing for a more forceful response to the threat that China's rise poses to the United States." Pillsbury's work has not been siloed to the American right, finding bipartisan interest as many Democrats look to continue his work in incorporating a version of Trump's China doctrine in the incoming Biden Administration. In December 2020, the Trump administration announced it intended to appoint him as the chair of the Defense Policy Board." Link to wiki page.

Kraut is one of my favorite youtube "historians". In this video he gives a very good history of how China sees and interacts with the world and the rise of Xi. It is titled the way it is because it ends with a "current" assessment of the competition between the US and China and he claims Xi is wiping the floor with Trump. Even if you disagree with the final point it is a great history on our subject.

According to Michael Pillsbury the Warring States period deeply influences the strategic thinking of the CCP and especially the "hawks" within the CCP. Our Warring States Page provides links to readings and videos to provide greater context to this important part of China's history. To learn more explore our page on The Warring States Period.

As part of the Warring States Period was what was known as the Hundred Schools of Thought. Arising during the Spring and Autumn periods these philosophies or ways of thinking arouse to help the Chinese to understand their changing world around them. Like the different states of the Warring States Period these "schools" competed with each other to influence the way the Chinese thought and acted. For more information on this visit our page dedicated to The Hundred Schools of Thought.

Dan Crenshaw has a great discussion with Jack Posobiec who updates Dan basically from where the book we just read ends and where we are today. Jack is very much inline with our author and how he sees China.

We intend to discuss this book via Zoom in the beginning of March.

In the moment when I truly understand my enemy, understand him well enough to defeat him, then in that very moment I also love him. I think it's impossible to really understand somebody, what they want, what they believe, and not love them the way they love themselves. - Ender from Ender's Game

I recommend we focus our discussion on understanding how the Chinese (CCP) see themselves and see the world. As part of that focus, here are a few questions we could possibly discuss.

We had another really good Zoom discussion about the book. Some of the big focuses for the discussion were: