This is the third week of our defensive tactical focus. This focus is on zonal defending by the defense line. We have run this practice focus before and then ran a week of practices focusing on individual defensive skills. We are now returning to focus on the defenders playing as a team with one player pressuring and one player covering.

Remember to keep in mind that in our 6v6 games we are now playing we are setting the ground work for our players to eventually play 11v11 and nearly all 11v11 teams now play with a four defender unit. As such, please watch this video to fully understand zonal defense as that is what we are teaching this week with a focus on the two center backs.

If the defenders are being effective switch over to the attackers and help them create 2v1 situations to make the defenders deal with that.

Small sided games on the teams normal fields. Start talking with players about their defensive posture and turning the attacker. Also discuss how they stay between the ball and the goal.

Orcas vs Salmon with a ball 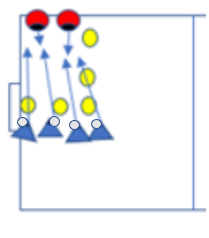 This game is just like the regular Orcas and Salmon that we play except this time the Salmon have to dribble the ball and the Orcas eat them by kicking their ball out of play. Once a Salmon is eaten he becomes an Orca the next time through. We are applying our defensive skills and we are working on dribbling skills and marrying this with agility development.

Coaches have two options to choose from. We tried both our first week of defensive focused practice. The first one is more complicated to run, but has the advantage of the defensive unit shifting back and forth as a unit.

The focus for this exercise is to get the Blue team (focus team) to press and cover as a defensive line. The Red team will focus on creating 2v1s and passing to score a goal. 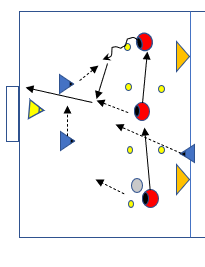 This option is a simplified version of the exercise we tried on Tuesday. Coaches tell Red to either attack from the left (with the support of the Red center forward) or the right (once again with the support of the Red center forward) and Blue defense practices pressing with the near side center back and covering with the far side center back. The coach has Red attack from one side and then the other in order to train the Blue defensive line to press and cover as a defensive team. Rotates players through the Blue center back positions. 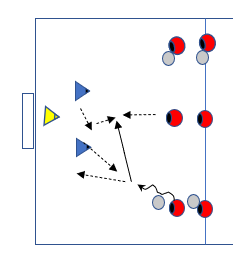 The focus for this scrimmage is how the defensive line pressures and covers and positions itself as a defensive unit.

Sam will create the match-ups and field assignments based on number of players per team that show up. He will attempt to make it that all players get as much playing time as possible and that teams stay together as much as possible. If the turn out is good Sam will create an additional field.