Practices this week are still at Rainier Vista 4. This is the second week of our three week training focus on building up out of the back through the middle third of the field by spreading out and passing. This week we are focusing on the skills required to string together multiple passes so we can advance down the field looking to take advantage of where the opposing team is not.

At this age some of the players have the ability to pass the ball from the middle of the field to anywhere in their half of the field with a push pass. Some players need to do a long pass. The are two different forms and the focus for our practice will cause you to have to train the two different technics depending on the ability of the player. Please review the two videos below to better focus your coaching of the technic. Please take note that they are two very different technics and you as the coach have to assess and train which is the right technic for each player in the given situation.

Small sided games on the teams normal fields. We will once again have two pug goals per team AND NO dribbling. Just passing and shooting. Players have unlimited touches, but they cannot dribble around. For them to be successful players must spread out and make supporting runs. 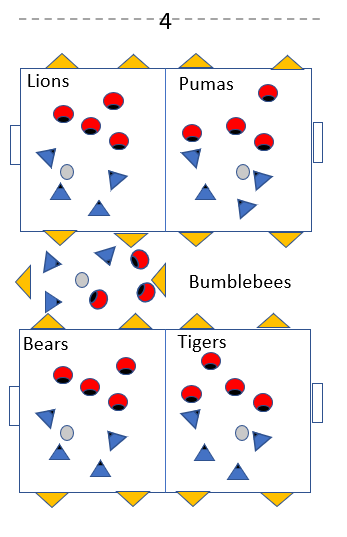 The name of this game is Tails. The purpose of this agility session is to get the players making sharp left, right and backwards turns and cuts. Additionally, to be successful the players have to keep their heads "on a swivel" looking all around them. Split your half field once again in half. Have all of your players except three put tails on. A tail is a penny tucked into the back of their shorts that hangs out like a tail. Make sure the tails are hanging out and the players don't just have a little nub sticking out.

We are extending this practice period by five minutes to ensure you have enough time to thoroughly work through the passing development.

In this game the players partner up and face each other on opposite sides of the line of cones. After the coach demonstrates a good push pass and a good long pass the partners practice a few times. Once the coaches determine the players are ready the partners race against the other partners to see which team can pass the ball across the lines 10 times first. Each pass counts as one. Coach should emphasize that could smooth controlled passing is more successful than frantic one touch. Coaches should demonstrate this. Push the lines further and further back to the point where the players are effectively moving the ball from one side of the field to the other. 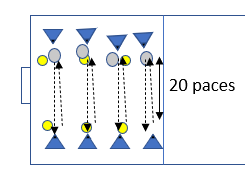 Once the coaches believe the players have done the Race to 10 enough they can move on to Around the Box. Around the box is a passing skills game where there are two teams and they are racing to pass their ball to each of their players two times around before the other team can do the same. One player from each team is in the middle. He passes to a teammate on the outside and then that teammate passes it back. He then passes it to his next teammate. Those teams have to stay near the outside line of the field or midline. Once again, the team that does it best will most likely be the team that traps, looks to who they are passing and then makes a good technical pass and not the team that just frantically one touch kicks it. 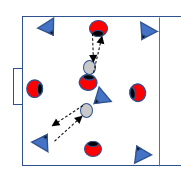