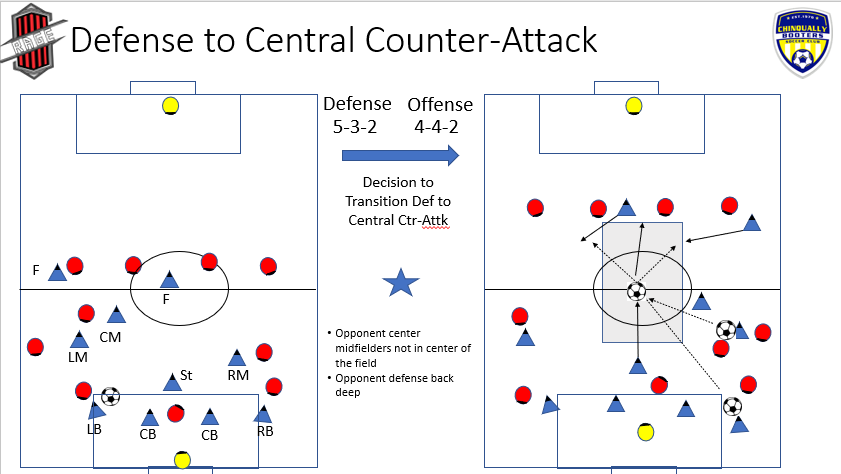 To start the attack, the midfielder or defender regains possession of the ball in our defensive half of the field. She quickly assesses that the opponent's defense has dropped back from the center midfield line AND that the opponents center midfielder(s) is away from the center of the field leaving an empty space where the gray box is depicted in the sketch. Our stopper also sees this opportunity and makes a fast run straight up the field asking for the ball. Our player with the ball makes a fast push pass along the ground leading the stopper forward into the attack. Speed is critical. The stopper takes the ball and rapidly dribbles toward the opponent's goal. The two forwards time their supporting runs to be just outside the opponent's center backs so they are able to do a give-and-go with our attacking stopper or receive a through pass from her if the center backs close on her quickly. Our attacking center midfielder provides a supporting run along the stopper's flank providing support as required and ready to take a long distance shot from outside the 18.

The remaining midfielders and defenders primarily move forward with the priority of preparing for the opponent's counter attack in the event that we do not score and lose possession of the ball. If our forwards and stopper retain control of the ball, but do not score our midfielders will push forward into our 3-5-2 formation and transition into a tiki-taka style of play.

These are the factors that must be true for us to transition into the long counter-attack:

The center counter-attack will likely be available after we have tried two or three long counter-attacks. These long balls will condition the opponent's defenders to back up which will help create space in the center of the field. Additionally, as their midfielders push forward and search for scoring opportunities against our five defenders they will take more and more risk in the center of the field. It is at this point that the opportunity for the center counter-attack will arise. If this attack fails and we transition to tiki-taka we need to be very careful that the stopper and the center backs communicate as we transition back to three defenders and five midfielders.