Rage White is a skilled team focused on improving our play by focusing on controlled build-up through safe and simple passing and then intelligently exploiting the opposing team's defensive weaknesses. The team plays a 2-3-1 formation.  In the build-up portion of the field (defensive half) the team plays positional offense where the center backs and outside midfielders play wide and the center midfielder moves from side to side creating numerical superiority. The keeper is a critical field player providing an additional passing option. Players make deliberate passes with tempo on the ground in the direction they are facing. When players receive the ball they are facing the direction they want to pass it and have already scanned the field to see what the best forward passing opportunity there is.

Once the team crosses the midfield line it transitions from positional play to creative movement to create opportunities. The forward posts up at the top of the box and his primary role is to distribute the ball to midfielders attacking forward. Defenders are always looking to step forward to make an attacking long run or take a long shot.

Our preferred methods are: 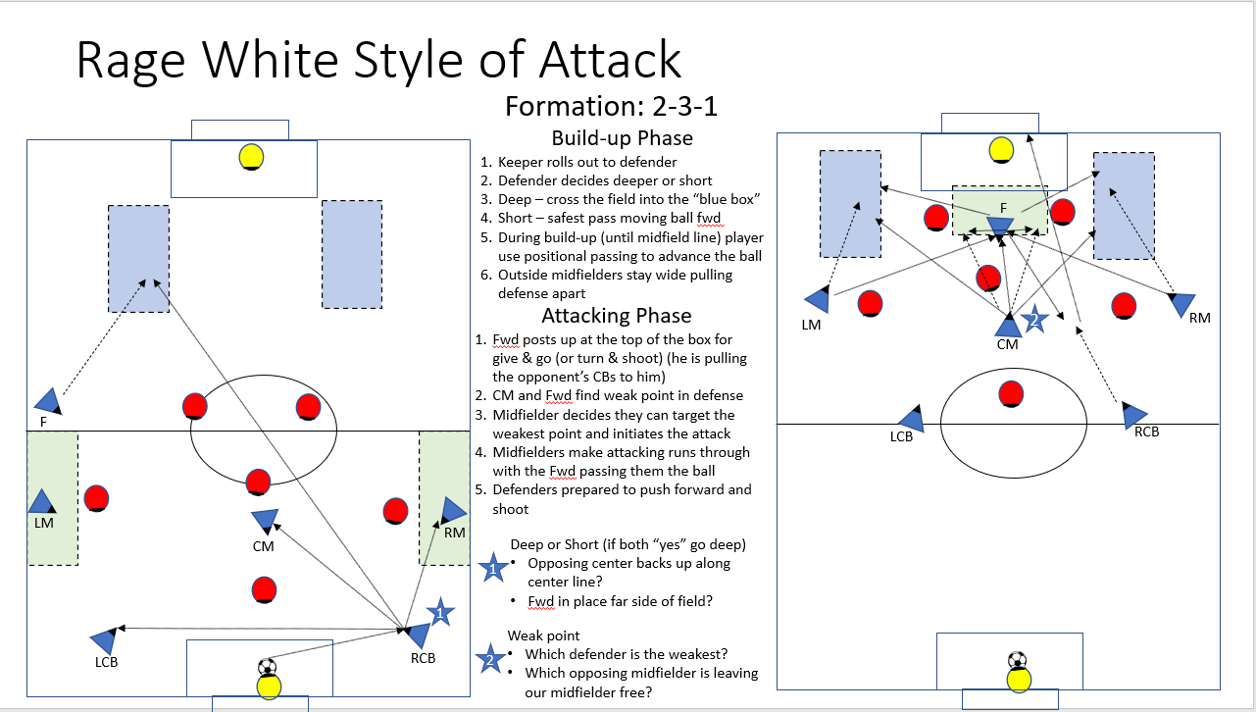 Deep or Short Attack (Build Up)

When the defense gets the ball either from turn over or from a goal kick or throw-in they face the decision to go deep or stay short and deliberately build up. The team is a ball control team and will only go deep if the chance of success is high which means the conditions are right. The following is the list of required factors to make the decision to go deep.

If these two criteria are not met then the defense builds up out of the back. The team plays a positional ball control style. Positional means that the center backs and outside midfielders play out wide pulling the other team's defense apart. Our center midfielder moves to create a numerical advantage wherever the ball is. Players pass the direction they are facing with firm tempo to players who have a high chance of retaining their pass. It is better to pass it back during the build-up phase of the attack and start again then force it and turn it over.

Once the ball crosses the midfield line the team transitions to an offense of movement. The forward posts up above the box pulling the defense back and causing the defense to focus on him. His purpose is the draw the attention of the defense and to distribute the ball. The outside midfielders are free to roam across the field looking for open space and pulling the defense out of position. The center midfielder the play maker anticipating opportunities and coordinating for our players and the ball to be there at the same time to create a scoring opportunity. The defenders are looking for opportunities to attack forward either along the flanks or long range shots from the center of the field.

If the criteria for deep attack is true (opposing defense is at the midfield line and our forward or midfield is in position) our player with the ball will make a long pass with as much back spin as possible towards the outside of the far post of the opponents goal. Ideally his pass lands and bounces straight up for our attacker to run on to it for a shot. We do not pass toward the goal or along the passers side of the field. The angle of the pass makes it either too difficult to play or too likely that the opposing team's goalie will come out and play the ball. We do not force the ball down the field. Our ball control skills are so good that we should be able to move the ball down the field and create a scoring opportunity without significant risk of losing the ball. The impact of this option is less about scoring goals and more about keeping the opposing team's defense deep which makes our build-up easier and more effective because there is more space.

The options below respond to actions the opponent may take and how we will respond.

If the opponent presses five players forward to press us in our defensive half we will focus on sending two midfielders long against their sole defender. 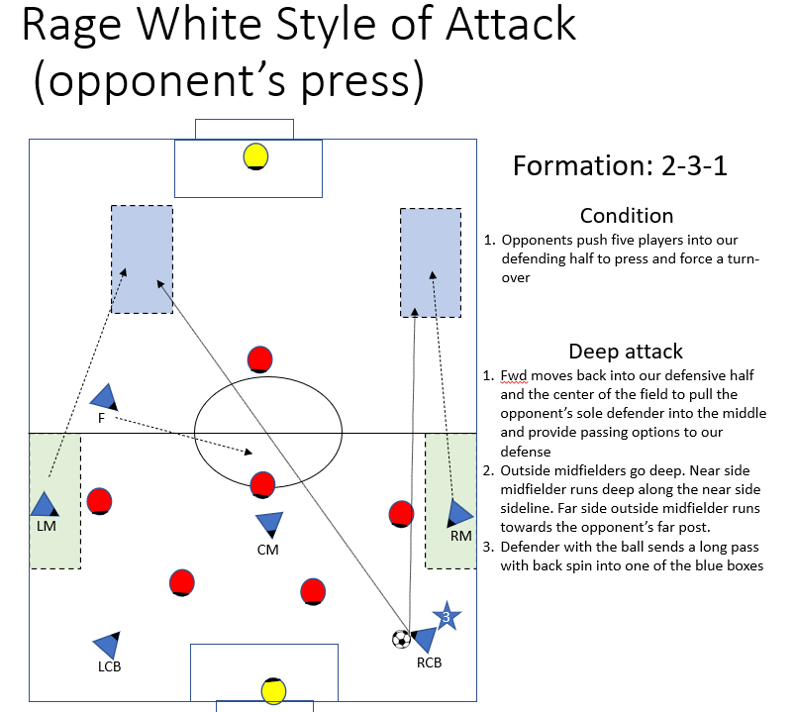 Overview of Deep Outside Attack