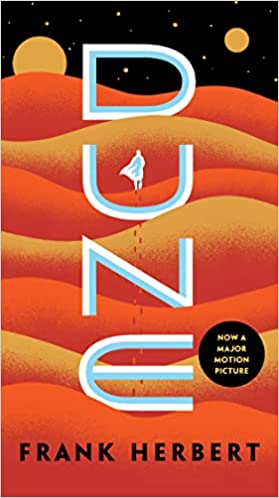 "Frank Herbert’s classic masterpiece—a triumph of the imagination and one of the bestselling science fiction novels of all time.

Set on the desert planet Arrakis, Dune is the story of the boy Paul Atreides, heir to a noble family tasked with ruling an inhospitable world where the only thing of value is the “spice” melange, a drug capable of extending life and enhancing consciousness. Coveted across the known universe, melange is a prize worth killing for....

When House Atreides is betrayed, the destruction of Paul’s family will set the boy on a journey toward a destiny greater than he could ever have imagined. And as he evolves into the mysterious man known as Muad’Dib, he will bring to fruition humankind’s most ancient and unattainable dream.

A stunning blend of adventure and mysticism, environmentalism and politics, Dune won the first Nebula Award, shared the Hugo Award, and formed the basis of what is undoubtedly the grandest epic in science fiction." Amazon book page.

After having a great discussion about the Hobbit, Randy recommended we try Dune as an example of great science fiction writing. We agreed and dove in. Some of us have read and listened to it several times before and some of us just watched the most recent movie. Some of us are big fans of fantasy and sci-fi and some of us could lead long happy and healthy lives without ever reading fantasy or sci-fi.

Book Guides - Dune is a great website to review in prep for the discussion. It gives a great overview of the book with a discussion of all the main characters and a summary and analysis of each chapter. It also provides some interesting questions.

Thoughts Going into the Discussion

Dune is a very rich and intricate work of written art. It is a book, if you like sci-fi, worthy of being read several times. And, actually for Sam, it took him several times and watching the movie to actually really grasp the book.  With this in mind, here are some random thoughts and questions to stimulate the discussion.

If anyone has any additional thoughts they would like us to discuss just let Sam know and he we will add them to this list. Or, just bring them up when we Zoom.

We had another great discussion. Randy, Julie, David, my mother, me and our new discussion member Amy joined us via Zoom. We went from 6-7pm Pacific time and as always it was a lively far roaming discussion. As part of that far ranging conversation here are a few of the topics we covered and in no particular order.

Julie started us on this question when we read the Hobbit and this question continued into Dune. Obviously it caused us to discuss whether Dune was actually sci-fi, fantasy or a blend. This naturally led us to a discussion of what is the difference between the two.

Sam brought up the question as to why read Dune instead of a history of the Middle East. After hearing the thoughts of the group on why read Dune it came to Sam that it is helpful to read a book like Dune because it helps you read history and "fill in the gaps". By that I mean that no history ever written has to richness of detail that a work of fiction has. The sources are never there to fill in all the details. Sci-fi provides those details and has to do so in a way that is believable. That believable aspect is the thought provoking side of fiction that the historian can bring to her study of history.

We discussed the book's argument that the environment is critical to the development of people. The point that we started on was that the two great warrior societies both developed on planets that were incredibly harsh. This harshness forged the two cultures into powerful warrior societies. Randy highlighted the similarity to winter survival and how all consuming it simply to survive.