All coaches should be at Horizon point no later than 8:30 on Wednesday dressed to play. Sam will arrive at 8:00 with Sebastian and set up the field and the Snack Shack.

When the kids arrive we will immediately start kicking around with them. Then Sam will welcome them and arrange them in one line from shortest to tallest and split them into four teams. Each group will go to their Team Coach and start playing a small sided game. Team coaches are welcome to play with them to demonstrate good soccer with passing and movement. Skills coaches will prepare their training.

Following the schedule below, teams will rotate as a team through one skills training task per session. The Skills Coach will lead that with the assistance of the Team coach who is with the team. The Team Coach remains with the team at all times. Then after the skills training the team returns to small sided games and this process is repeated through all four skills.

During the extended snack and water breaks the coaches will play 3v3 games among themselves to demonstrate a high level of soccer.

For all of the skills training coaches will focus on the fact that players learn through their eyes and doing. Demo each task several times and ensure the players are focusing on the specific aspects of the task you want them to focus on. Then have them execute the task over and over again. Demonstrate again the task and ask them what is different about the way you are doing the task and they are doing the task. And then ask them how this is changing the impact on the ball. Be careful about giving too much feedback at once. Have the player change one element of how he or she is doing the task as they improve. Try not to change too many things at once. Improve gradually.

Push Pass and Side of the Foot Pass:

Go over the basics of the push pass. Once you have them doing well enough move on to training them how to do an outside of their foot pass. Make sure you have them use both their left and right foot.

Outside of the Foot Pass

Start with the players paired up and lined up with their partner and pass the ball back and forth. Once they are basically proficient the pairs get in one lane on opposite side of the triangle cones. When the coach says "go" it is a race to see which pair can push pass and knock over all their cones. Have a few competitions. Once complete have them step away and practice passing with the outside of their foot. Once ready repeat the lane passing competition to knock down all the cones. 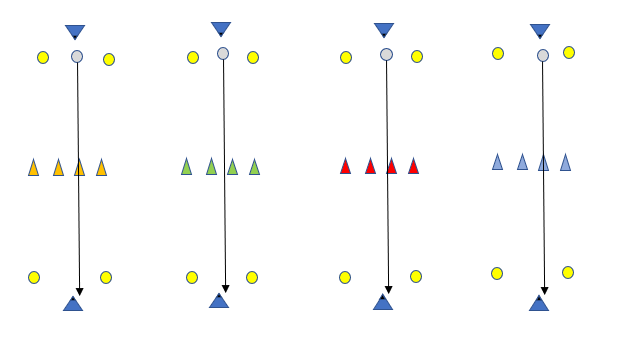 Focus first on getting a good driven long ball. If it goes well and you have time you can address adding backspin by striking a little lower and not following through. With this said, get the long driven ball first before moving onto backspin.

First start my demonstrating a good long pass and then have them partner up and practice. Then have the partners get in their respective boxes. It is then a competition to long pass the ball from their box to the player in the other box and to see which team can complete ten successful passes first. Once they succeed two or three times place the stands in between them so they have to pass over them challenging the players to put height on their passes. Each time they knock over a stand they have to run out and set it up and then continue. 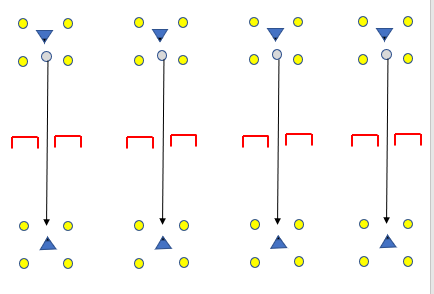 Focus on getting the players to have good form and that will translate into power.

Starting drill is all about getting the form right. Place three or four balls about 3 years in front of the goal and have the player shoot each in one at a time focusing on form. Have the other in the back "shagging" the balls. Have the player repeat this 4-5 teams with recurring feedback and then switch players. Repeat until all players have the basics down. Use the blue PVC goals to shoot into. Have the Team Coaches assist. 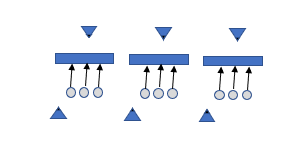 If time permits and they have a solid grasp of shooting you can move to this dribble and shoot drill. Once again focus on the form. The red flag out front of the goal represents a defender they are dribbling around. The red flags in the goal focus them on shooting to the sides of the goal. 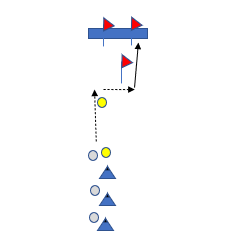 Demonstrate the move and then have the kids practice the move individually. Then put them in a 20x20 box and have them dribble around each other practicing their move. Repeat this process for each of the moves.

We will focus on three basic moves:

I want every coach to watch this video on heat injuries. If you watched it in the last few days you do not need to watch it again. Though the temperature should not be too high many of the kids will show up dehydrated from the last few days so they are starting at elevated risk which means the threat is real. Your focus and knowledge will keep them safe.