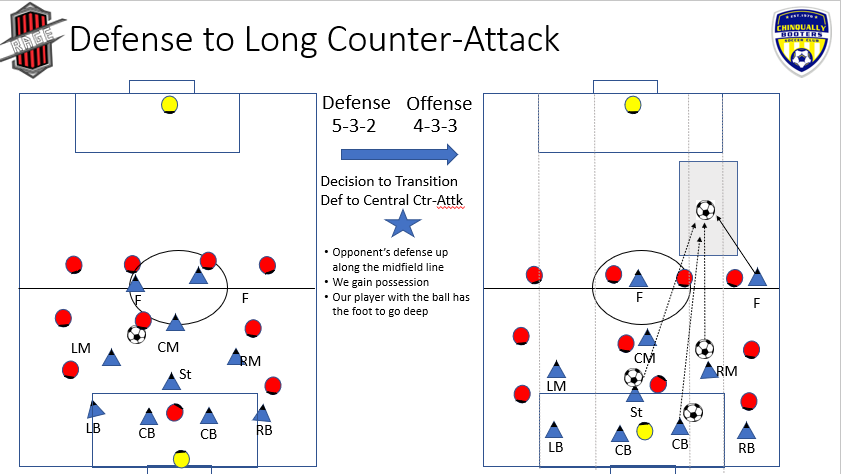 The long counter-attack is a conditions driven option that takes advantage of the speed of our forwards and the ability of several of our midfielders and defenders to accurately pass the ball long. In the long counter-attack, we either attack along the left or right side of the field, but NOT down the center. The reason why we never attack long down the center is that with such a long pass through the center it will most likely be won by the opponent's center backs or goalie coming out of the net. By making the long pass along the right or left side (see gray box in the diagram above) it is much more dangerous for the goalie to come off her line to get the ball because the ball is not coming towards her. This angle also makes it easier for our forwards to rapidly control the ball and attack.

To start the attack, the midfielder or defender regains possession of the ball. She quickly gains the game awareness that our forward along the half the we are attacking is along the same sideline and that the opponent's defense is pushed forward along the center midfield line. She quickly passes a long pass (ideally with backspin) into the gray box behind the defenders enabling our outside forward to run onto it. The opposite side forward moves toward the top of the 18 across for the far post from the forward with the ball to support her as she dribbles toward the goal. The attacking center midfielder is supporting the forward with the ball from behind as she moves to about 5 yards out from the 18 waiting to receive a pass or rebound and then in both cases shoot.

The remaining midfielders and defenders primarily move forward with the priority of preparing for the opponent's counter attack in the event that we do not score and lose possession of the ball. If our forwards retain control of the ball, but do not score our midfielders will push forward into our 3-5-2 formation and transition into a tiki-taka style of play.

These are the factors that must be true for us to transition into the long counter-attack:

The long counter-attack is not a blind kick and run attack. It is not a Hail Mary where we kick and pray. It is a deliberate method of attack based on the conditions of the opponent's defense and the position and ability of our players involved in this method. This is a very good option for us based on the speed of our forwards and the ability of several of our players to make the long pass that is required. For this to succeed players have to be anticipating when this opportunity will arise and then rapidly execute the actions involved before the opponent's defense can drop back.