We will follow our standard structure with a slight modification on Tuesday. The focus for this week is individual defensive skills of our defenders. This is meant to improve our defensive's units ability to defend as a team (our two center backs).

We have two slight modifications. The Bears may possibly have poor turn out due to spring break. Joe will also not be present. If the turn out is poor we will integrate the players who do show with the Lions and the Pumas. If the turn out is good Sam will coach the Bears. 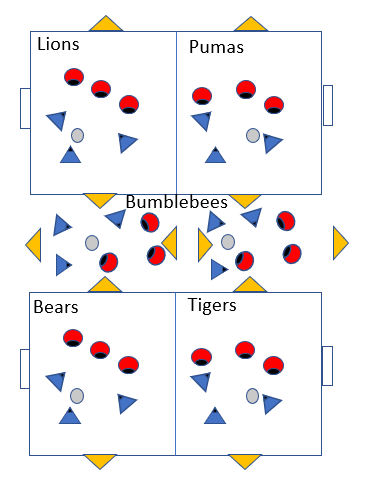 The purpose of this agility session is to get the players making sharp left, right and backwards turns and cuts. Make the field whatever size you think is appropriate keeping in mind the smaller the field and quicker and more agile the players must be. Pay special attention to the slower and less agile kids that they don't just quit and accept that they will be tagged.

Make a box that that is approximately 20x20 yards. All but two of the players are the salmons and they start at one end. Two of the players are orcas and they stay at the other end. When the coach says go the salmon try and cross the box to safety on the far side of the line that the orcas are starting on. The orcas try and tag as many players as the can. Each time they tag a salmon the salmon is transformed into an orca for the next iteration.

Coaches have their choice of what defensive focused skills training they would like to conduct. Here is an option that is available for all the teams to include the Bumblebees. In the end it is up to the coaches to choose this exercise or create their own. 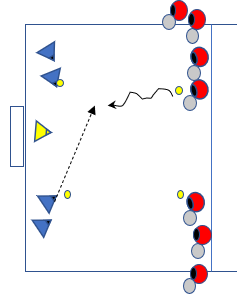 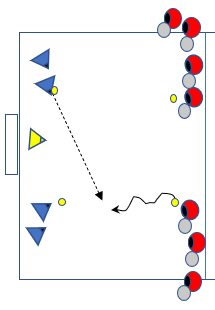 This time we will also include the Dragons in our scrimmage. It is the team we are picking up when Coach Sergio is unable to make practice due to coaching Timberline. This scrimmage the Tigers will play against themselves as shown. That will change each time.

Coaches, please pay special attention regarding safety due to size difference between the Dragons and the other Mini-Rage teams.

Sam will determine who scrimmages who and where based on number of players by team in attendance.

Sam will determine who scrimmages who and where based on number of players by team in attendance.

Any of the Bears, Lions and Puma players are welcome to stay and scrimmage against the GU10 team.