This is our third week of practice following the weekly learning framework of tactical-technical-tactical. The theory behind this is to introduce a tactical situation during the first week at the two practices. In this case it was building out of the back from a goal kick. Coaches and players identify what skills need to be improved to effectively execute the tactical task. The second week, which is the technical week, we focus on those technical skills during that week's two practices which in this case was passing and trapping. The third week we focus on the original tactical task to cement the tactical decision making and technical skills development in conducting the tactical task. This is the third week and we are still focusing on building out of the back. Additionally, we should be able to focus on a high press from an opposing team's kick-off.

Small sided games on the teams normal fields. If more than six players come coaches should consider running two small sided games as the purpose of this exercise is to get the players as many touches as possible in a game like situation. 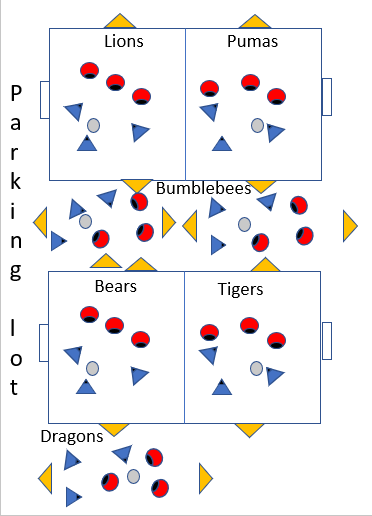 The purpose of this agility session is to get the players making sharp left, right and backwards turns and cuts.

As we have done this before the coaches should be able to focus on more and more detailed aspects of the exercise. The keeper and the left and right backs should have the basics of this. Focus on making sure the accuracy of the keeper's goal kick. Focus on where the left and right back are facing to prepare themselves for the next pass. Focus on the full and midfielder from the other side of the field moving into position. Once you have this then work heavily with the Red team to get the high press working and them aggressively challenging the player with the ball and cutting off passing lanes. Additionally, caution them about risky passes back in front of their own goal. 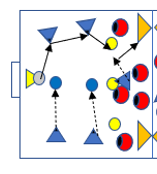