The boundary between the opportunity zone and the build-up zone is determined by the ability of the passer to reliably reach the scoring zone with a pass and the relative ability of our offense versus the opponent's defense.

The kicker will wait until the players are in position and she will then signal one of the three plays. 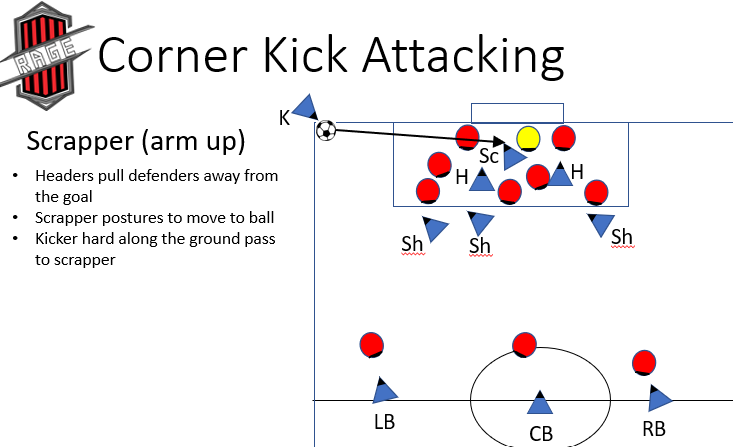 The kicker will put her arm straight in the air signalling that she is targeting the scrapper. The Headers will move slightly away from the goal trying to bring their defenders away from the goal. The scrapper will posture her body to quickly move towards the ball on the cross and block out the goalie. The kicker will lower her arm and then pass the ball very hard and low off the ground (below the knee) right in front of the goal approximately 1-2 yards in front of the goal. The scrapper and the headers close on the ball and one touch shoot. The shooters anticipate the ball coming out up top so they can one or two touch the ball and shoot. The kicker follows up her pass moving into the six yard box in order to score. 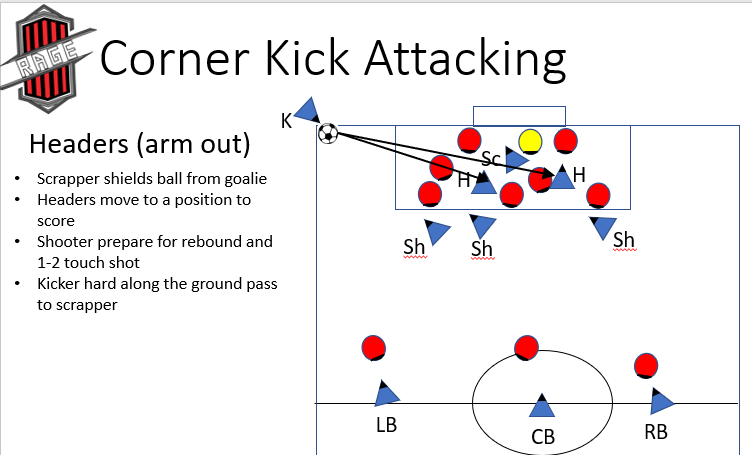 The kicker will put her arm straight out parallel with the ground. She will then pass a medium speed cross just about head height aiming at the Headers. Scrapper will shield the ball from the goalie. The shooters will position themselves to one or two touch shot if the ball comes out. The Headers will head the ball on goal with power to score. 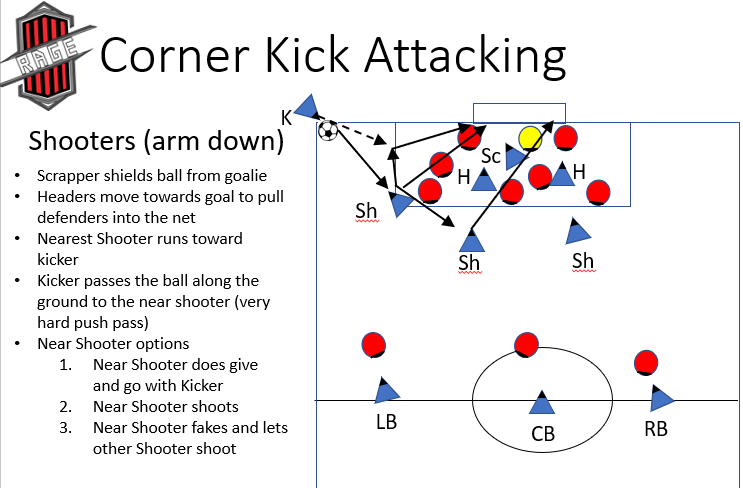 The kicker will point her arm down towards the ground. The Headers will move slightly in towards the goal to pull the defenders in away from the Shooters. The nearest Shooter will make a run towards the kicker and the kicker will pass the ball to her with enough speed that the ball will roll with tempo to the middle of the field. From here there are three options the running Shooter has:

Center of the Field

Outside of the Field

The Grizzlies have four basic methods for goal kicks. 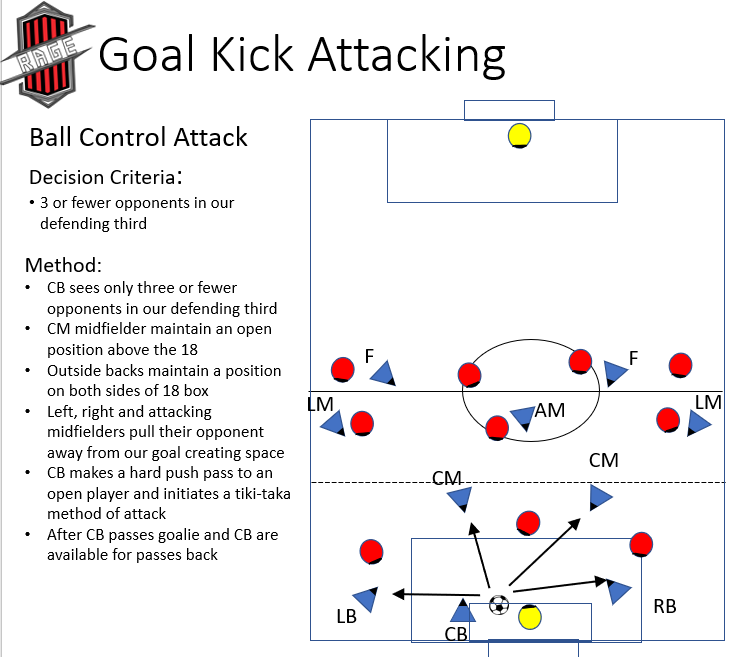 The ball control attack is our primary method of goal kicks and initiates a tiki-taka attack. The ball is position in the middle of the goal on the 6. The CB sees three or fewer opponents in our defending third of the field. The goalie makes a short push pass to the CB standing two yards away from her. The CB then makes a simple but firm push pass to one of our players in our defending third. The outside backs have pushed out by both sides of the 18. The two CM are spread out in front of the goal about 5-10 yards outside the 18. The AM and outside midfielders are pushed up towards the midfield line in order to create passing space as we bring the ball forward. The goalie is always available for a pass back as a field player. 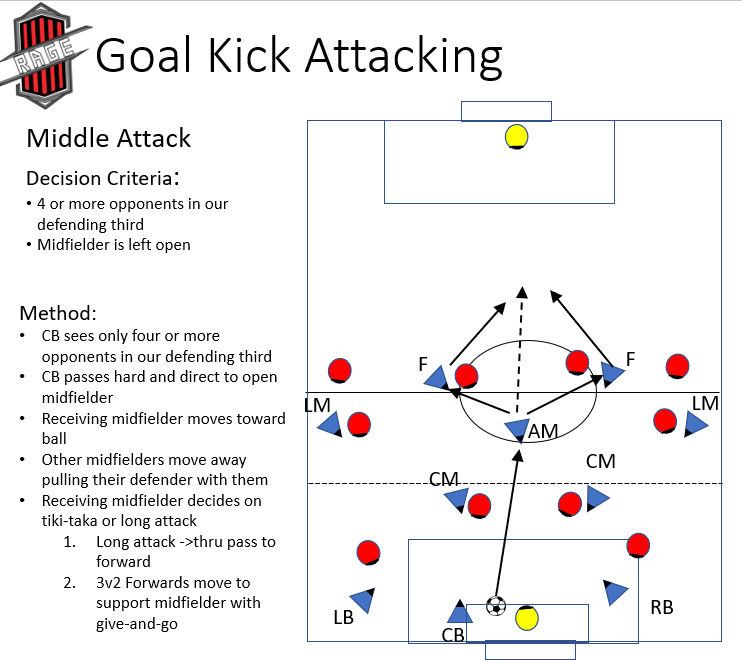 The Middle Attack is the most common way a team does a goal kick. The decision to do this is based on the other team pushing players forward in an attempt to steal the ball in our defending third. When the CB sees four or more opponents in our defending third she signals her intention to play it to the midfield. The outside midfielders and attacking midfielder spread out and the open midfielder moves toward the CB. Unless the opponents have pushed a defender forward we will have an open midfielder. The CB will then do a hard straight and low long pass to the open midfielder. The midfielder will receive the ball and initiate our attack. Her first option is down the field trying to create a 3v2 situation with our forwards isolating two defenders. 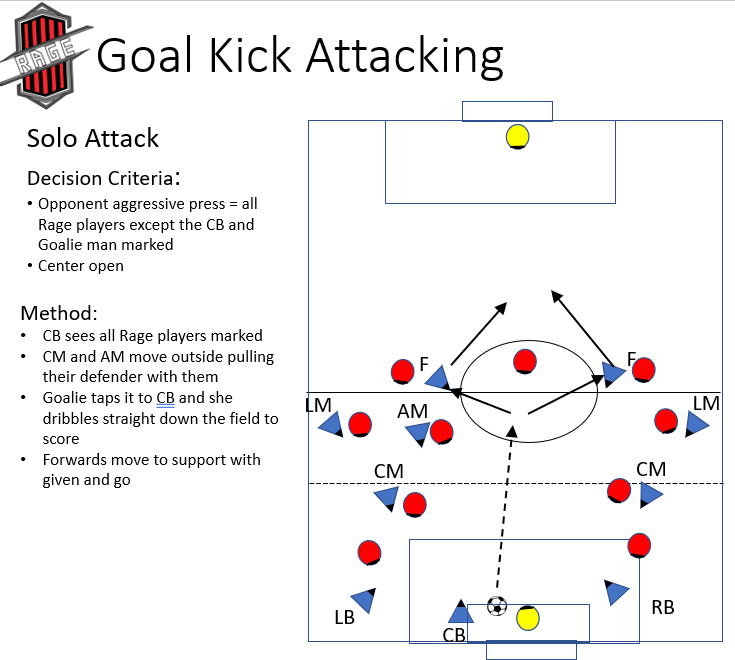 Solo attack is based on the speed of the CB. If she sees all of the Rage players marked up man-to-man and there is no dedicated opponent marking her she signals her intention to our midfielders. The CMs and AM make runs away from the center of the field pulling their defender with them creating an open space in the middle of the field. The goalie taps the ball forward  and the CB dribbles at full speed straight down the middle of the field looking to create a 3v2 situation with our forwards. 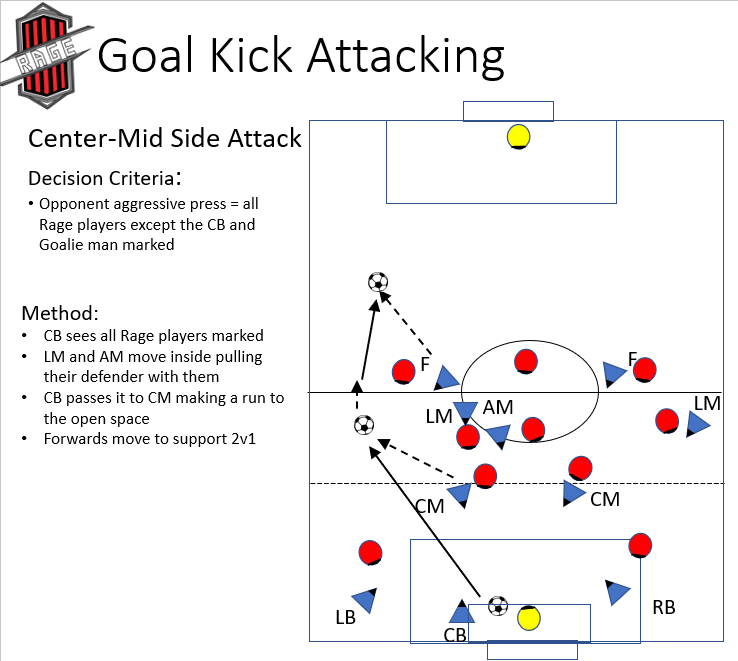 The last option is once again based on the opponents pushing forward and marking all of the Rage players man-to-man. The CB signals her intention to make the Center-Mid Side attack. The side she indicates has that side midfielder and AM move toward the center of the field. The CM then makes a run at full speed into that open space. The CB then makes a lofting long pass dropping into that space for the CM to run onto. The near side forward moves to a position to create a 2v1 situation against the opponents defense. The CM and F work together to beat the one defender and make a rapidly attack into the scoring zone.