Our defenses are all focused on the shutting down the opponent's most likely method of scoring. Most goals are scored from in front of the goal. This is the width of the six-yard box out to about 5 yards past the 18 yard-line. It is absolutely essential that every opponent within this area is closely marked and especially the opponent with the ball. Marking these players means being within one yard of these players and especially the player with the ball. This enables our defenders to block any shots and steal the ball.

Defenders outside of this high threat zone are focused on disrupting the opponent's ability to effectively move the ball into this threat zone. 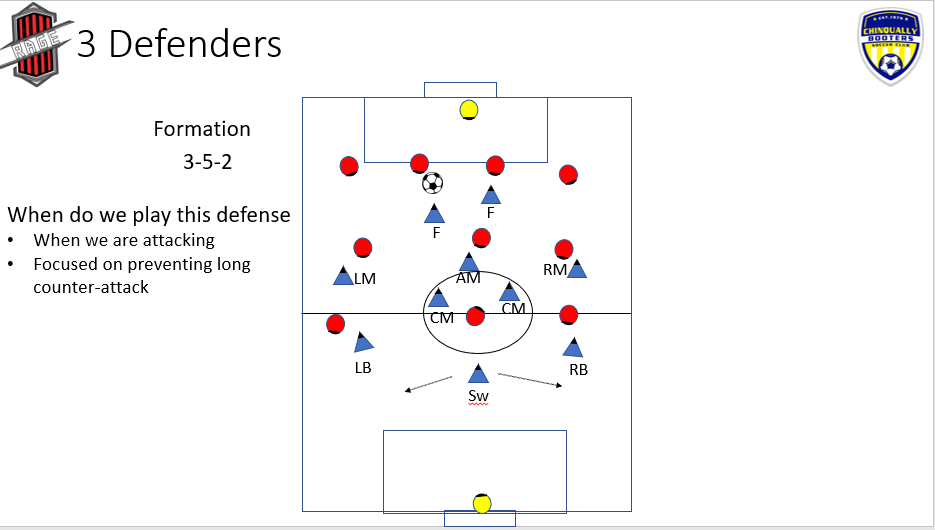 When we are all the attack we will transition to three defenders in order to give us numbers forward. The center back becomes more like a deep sweeper focused on disrupting an opponents long counter-attack. Her focus is to respond to any opponent's long pass into our defensive half. The outside backs are still focused on slowing any opponent's attack along the outside and keeping the pressure forward while the team transitions into a five defender defense. 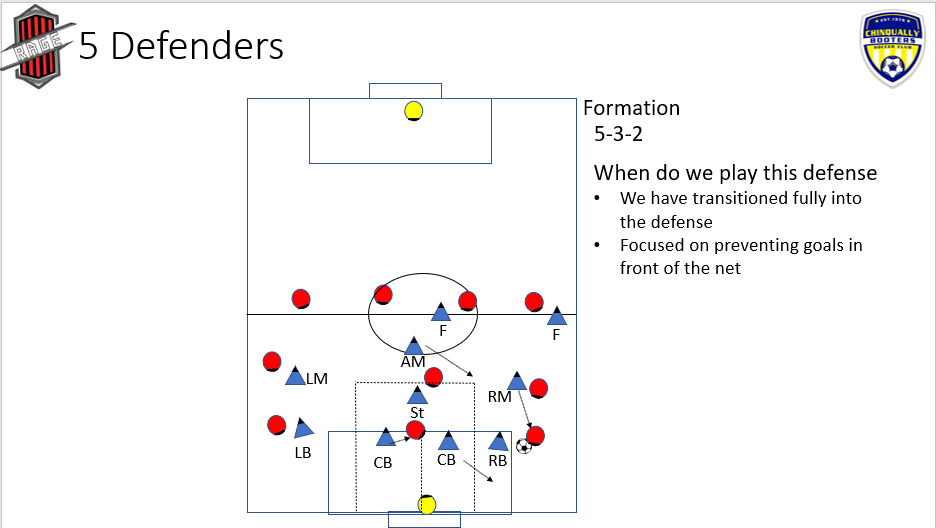 The five defender formation is built to deny the opponent the opportunity to get a clear shot from with the high threat zone which is approximately a half circle radiating 25 yards out from the center of our goal. This is where most goals are scored from and as such we are placing two center-backs and a stopper in that area. The stopper closes down quickly and prevents long range shots. The two center-backs closely mark attackers in their zone preventing them from getting the ball or being able to turn and shoot on the goal. The outside backs focus on turning the threat outside and away from the high threat zone in front of the net. Their focus is on containing, turning and disrupting. Their supporting outside midfielder and possibly the stopper can assist by double teaming the attacker they are marking. The center backs do not leave their zones until we are ready to transition onto the attack.

The defensive role of the attacking midfielder in the five defender defense is to split the field in half and keep the opponent on either the left or the right side of our defending half. The attacking midfielder keeps the opponents from being able to move the ball from side to side. This constrains the options available to the opponent. She and the outside midfielder on the side of the field with the ball then try and disrupt any ball movement to prevent them from creating scoring opportunities and to create the opportunity for us to steal the ball and regain possession. 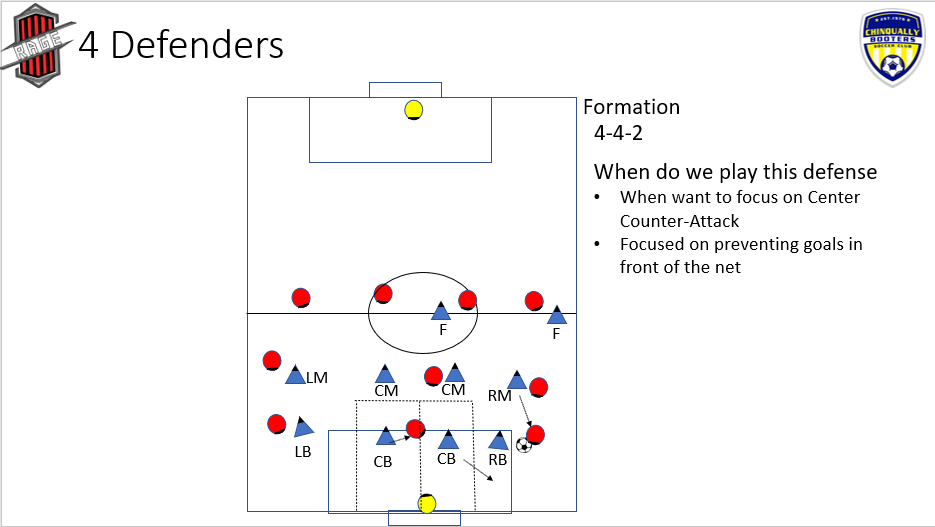 The four defender formation with two center-backs is a standard formation with four defenders and four midfielders focusing on defending our goal and preventing the opponent from scoring. The center-backs own their zones in front of our goal out to a few yards about the 18. The also help the outside defenders if they are beat out wide. The two center-back zones in front of the goal are the most important. If a center-back has to leave her zone (assist and outside defender, coming back on defense) either the other center back or outside back needs to fill that zone. There always has to be a player defending in those two zones as a center-back would.