This is Football (Season One) 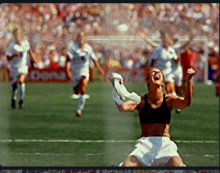 Amazon Prime has created a series about soccer that does the Beautiful game justice. There are six episodes in the first season and every one is worth watching. It strives to encompass the entirety of the Beautiful game. The first episode is about how the Rawandan national team helped bring the country together after its period of genocide. The second one is about the paths taken by the US Women's team and the Japanese Women's team to the World Cup final. The third is about the role of chance in soccer. The fourth is about Iceland's team and its march into the World Cup and the national pride behind it. The fifth episode is about the love of the game from a young man who decided to become a professional ref to players of soccer who are blind. The final episode of these season is about Messi and the wonder he creates in the game.

The whole series is beautifully day and will make a believer out of even the deepest soccer skeptic in the beauty behind soccer.

It may be a bit abstract for elementary school kids, but is wonderful for middle schoolers and up who are not afraid of becoming a lover of the Beautiful Game.